The Ten Commandments of Organizational Culture

There is a sweet spot moment for any organization to (re) think and articulate its culture, the distinctive set of values which ideally translates into practices and behaviors across the whole organization. Put another way, this is the kind of thing you would write about in the obligatory “About Us” or “Who We Are” section on your website. As for timing, you might take advice from Jeff Lawson, CEO & Co-Founder of Twilio: “Plan to articulate your values when you’re between 20-40 employees. Don’t express them when you’re three nor when you’re 500 people.” For enpact, the right moment came at the beginning of 2021 when we reached a headcount of 50.

But how do you go about it? Is there an iso-normed process for establishing an organizational culture and value system?

Is it possible to create a culture from above or does it grow from within? Does culture come to you, with or without your (wrong) doing? And why don’t you just print some nice-sounding values on mugs and hand them out to newly onboarded employees, subtly turning them into believers with each sip of coffee?

To answer why you don’t or shouldn’t, along with all the other essential questions, let me share my 10 key learnings from facilitating an organization-wide cultural update. 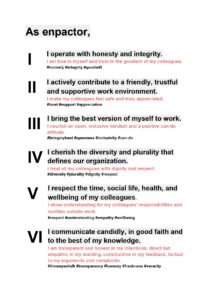 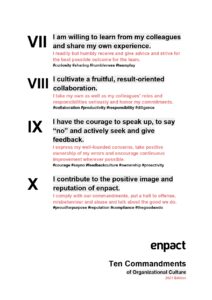 Our own ten commandments document at enpact, signed by all enpactors around the world.

#1 Get management and employee buy-in

Defining your organizational culture is neither a management-exclusive topic enclosed in a Christmas newsletter shared with employees nor is it an employee-only initiative that gets voted on in a regular all-hands meeting. Make sure to create an inclusive process and get buy-in from both sides right from the start as this will be paramount to your success. In this case, that means the seamless adoption of the defined culture.

#2 Build upon what’s already there

Chances are this is not the first time your organization is putting some brain power into this. Find out who led or was involved in previous initiatives and ask for their perspectives. Whether they are founding members or long-term employees, getting their thoughts will not only make it easier to identify “core values” that have been around since the beginning but also to explore how your culture evolved over time.

By the way, the “build upon what’s already there” rule also holds true for the process itself. Rather than drafting your culture from scratch, you are taking part in an iterative process of fearless introspection and self discovery. The job here is not to reinvent but to recognize yourself by looking in the mirror and eventually eing able to say “this is who we are,” which makes for ideal website material (see above)

Coming up with values is not one person’s job. Create a task force as balanced and diverse as possible from all ends of the organization. Beyond the obvious balancing (gender, sex, age, ethnicity, cultural background), I would argue there are three other categories to watch for in creating your “Culture A-team”: (1) seniority – relatively new vs. senior staff, (2) department – outward-facing (sales, marketing) vs. inward-facing (HR, finance), (3) personality – extroverts vs. introverts with the latter probably being the most important. It might be hard to make them volunteer for the job, but once you have them in your task force you can leverage their strong listening and even stronger observation skills. Talking values in your organization really is the introverts’ hour to shine!

#4 Focus on your core values

This is by far the most participative and fun part of the process. When facilitating the update at the beginning of 2021, we already had six core values in place: empowerment, adaptability, co-creation, trust, appreciation and integrity. However, we decided to open the candy box again and have the whole team interact and collaboratively build a value matrix by choosing 30 out of 300 values that would then in turn guide the task force through the rest of the process. By alternating divergent and convergent thinking, we finally were left with a manageable number of collectively approved values — the groundwork for the editorial nitty-gritty that was to follow.

#5 Find the right format and tone

We decided on a name early on for our value statements. In all modesty, we opted for “enpact’s Ten Commandments,” obviously more out of love for a great song by German ‘80s synthpop band Camouflage than for its weighty religious connotation. The idea was clear: we wanted to come up with no more than 10 values that all of us could easily subscribe to and be willing to hold each other accountable for. This also influenced the format and overall tone we were going for: solemn and binding yet clear and engaging following one of our Co-Founder’s favorite mottos, suaviter in modo, fortiter in re, latin for “gently in manner, firmly in deed”.

At the same time, we decided to make every statement start with “As an enpactor, I (…)” applying a neurolinguistic programming nudge that would help us identify with each value.

As with an organization’s vision or mission statement, when formulating your values, you should quite intentionally reach for the stars. Envision an ideal future state, the “promised land” you want to send your team out to evangelize. On the way to organizational greatness, you can still harvest some of the low-hanging fruits in passing. In the daily hustle and bustle, values and good advice, and even common sense, might occasionally be thrown overboard. It is nice to have a written reminder of what everyone individually and the team collectively signed up for.

To translate values into practice and practice into behavior, they must be actionable. There is no manual for exerting “honesty” or “integrity”. Writing it on the office wall in big letters or handing out printed mugs (more on this later) will be of no help with it either. “Honesty” itself is an abstract concept, a noun, and as such nothing you or anybody else would immediately be able to put into practice. Go with “always tell the truth” instead and it suddenly is a whole different story. Drawing from this example, Simon Sinek put it as bluntly as possible: “values are verbs”. They manifest in what you do. That’s why in “enpact’s Ten Commandments,” the “I”sentence is followed by a descriptive one-liner exemplifying the statement with a clear action.

Commandment #4: “As an enpactor, I cherish the diversity and plurality that defines our organization.” (hence) “I treat all my colleagues with dignity and respect.” 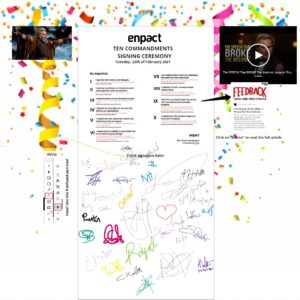 Once you’re done, drum up your people, read your values out loud and have everyone sign them.
Give them center stage and thus the importance they deserve. This underlines that you are serious about your organizational culture  and that you have faith in the process. With a global team like ours, we waited for two weeks for the right all-hands to come our way, making sure all our fellow enpactors from Mexico to Indonesia could join for the virtual ceremony we had prepared. Needless to say, the event was a total blast!

#9 Give it a fresh look each year

Don’t fall in love with your values. This might come as a surprise and seem counterintuitive if not outright blasphemous. While your core values will stick with you until the end, the way you learn to make them actionable with your team might change. Values that were not important during your early days or growth stage might suddenly gain relevance. Peter Drucker famously said, “Culture eats strategy for breakfast.” That said, your appetite may change.

There are already tons of self-affirming ceramicware and office walls printed with false value statements and semi-inspirational mantras out there. Beware of the hype. While having a visual reminder of your values is nice, you now know that the only way to make your culture stick is to live and to lead by example. This is because it’s your actions, and only them, that speak louder than words.

Chris is a problem solver, people person, party philosopher – “Driven by curiosity in a world of contingency”: In the last 7 years, he gained hands-on experience in a wide variety of sectors, disciplines, and countries: Project & Event Management, Non-Profit Fundraising, Sales & BDO, Public Relations, Corporate Services, Startups and Academia in Europe and LATAM. 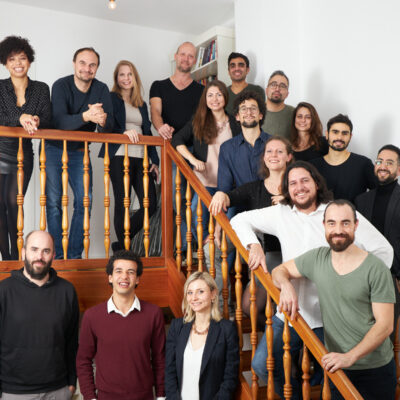 From 10 to 50 employees: The what, the why and the how of growing your company and handling the change 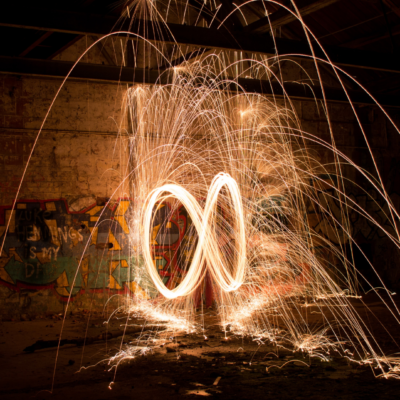 Why Our 8th Anniversary Has Us Focused on Infinity

Turning eight has us thinking about the future and our potential to make an infinite impact. 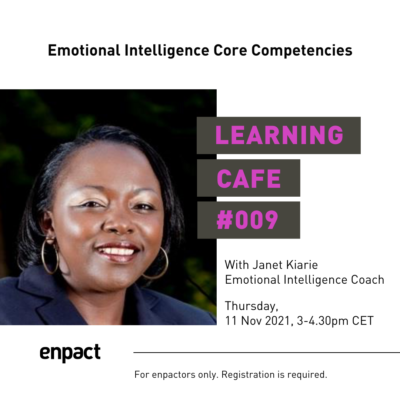 Our way to learn at enpact is to learn together! Read the story behind our Learning Café, how did it go in 2021 and what we have in store for 2022.