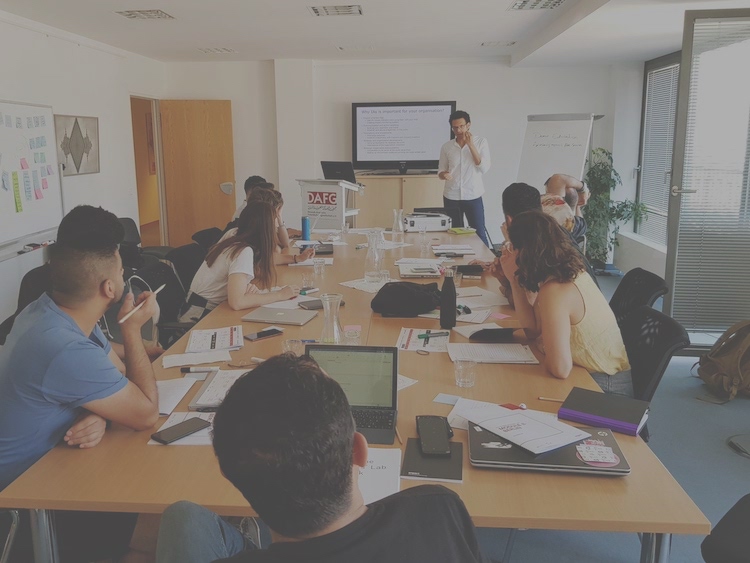 Back in the high-time of board games, one rather famous one was called “Snakes and Ladders”. The rules are simple: Square by square, you dice your way up to the finish line. If you step on a snake square, you slide down a few rows, but if you’re lucky and step on a ladder square, you get to skip ahead and leave your fellow players far behind you.

Those helpful ladders exist in the real world, too. The budding startup scene in Iraq has found one of them in the shape of the Programme Designers’ Lab (PDL). It invited a delegation of leaders of incubators, accelerators and startup-spaces to Germany for a week full of workshops, insights and trainings.

“Bringing people all together in one location is really important. Otherwise you create country silos. People won’t collaborate as much as they could, and that is why shared spaces are so important,”

says Alexandra Clare, co-founder of Re:Coded, a US-based non-profit organisation that operates in Iraq, Turkey and Yemen. The non-profit focuses on offering young people affected by conflict a future in the digital economy, training them to be software developers and tech leaders. 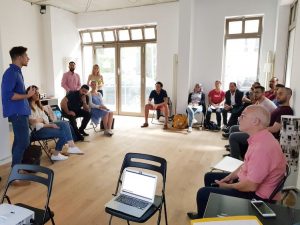 One of the sessions that the participants attended was led by Peter Harnischfeger, New Work expert and founder of PDH | NewWork.Transformation.OKR, who talked about “Leading Transformation”. Many a delegate has reached the point in their organisation where transformation is necessary: their companies are scaling, their teams growing, and their area of expertise is in ever higher demand as Iraq’s startup scene develops.

“The workshops are very personal, and concentrate on our and our organisation’s developments”

says Fadhil Bahaa Jawad, Programme Coordinator at Iraq’s first coworking space, The Station, and is looking forward to diving even deeper into the technical side of things and hands-on tools to improve his business.

Part of the delegates’ aim for their week in Berlin was forming a network not only amongst themselves, but also with potential investors and partners. Finding and securing investors is one of the big challenges Iraqi entrepreneurs face, and the accelerator delegates dove into how this issue can be tackled. “We are all working together on one mission, one goal,” says Fadhil Bahaa Jawad about the Programme Designers’ Lab.

Learning from others’ experiences is not only relevant on a personal level, as Fadhil Bahaa Jawad says. Iraq’s entire ecosystem can benefit from the delegation’s networking and learning:

“This is the great advantage of this programme: We can learn from others’ experiences, and can avoid some mistakes, and skip ahead a few steps.”

Mujahid Al Waisi, founder of the first Baghdad accelerator and incubator that supports promising startups, and also the community as a whole by empowering young people, says:

“Our mission is to match the human capital of Iraq with investors and the private sector.”

Iraq’s ecosystem is yet in its early stages. On average, it takes eight years to develop a mature ecosystem, according to Fadhil Bahaa Jawad: “We need more people to get involved in the ecosystem.” People like Hala Taleb Al-Mayahi. “I love doing something good for the society and making a positive impact, I just didn’t know how for a long time. Then I found out about PDL – it was almost like fate,” she enthuses.

Hala is the Finance and Administrative Assistant for Science Camp, a maker space in Iraq as well as a research center with extensive facilities to support entrepreneurs and help with prototyping. After finding out about Programme Designers’ Lab, she read up on entrepreneurship, immersing herself in the startup ecosystem and is now putting theory into practice.

“we need that positive push in iraq now, for the younger people to realise things are changing and the future is looking up.”